Silent Night / Stille Nag by Johannes Kerkorrel and the Kalaharisurfers

During the turbulence and noise of the late Johannesburg 80’s I had a notion to do a very strongly atmospheric/satirical Christmas Carols Album using the artists from the Shifty label. A sort of political Christmas skeefness. The idea was that these tunes from our own sensibility would provide us with a background music that shops could play to replace the BonyM albums each year … and also to have a bit of fun subverting the well worn old melodies. Ralph here gave such a great performance that I felt it was too good for satire. Its real Christmas in teargas city. You can almost feel the melancholia we felt each year living in the shadow of the beast….so here we are something for the shocking stocking
merry chrysalis
Warrick Sony 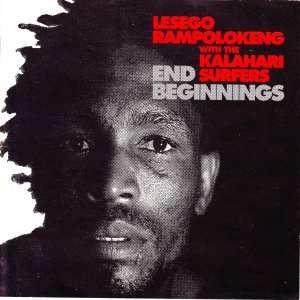 Warrick had desided to move to London after completion of this album and put together the first Surfers live touring band. Through Recommended Records they played a series of concerts in Europe culminating in the Festival of political song in East Germany. The  touring band pictured below was : Warrick on guitar vocals and tapes, Chris Cutler on drums,  Tim Hodgkinson sax and keyboards , ALig on accordian and keyboards Mick Hobbs on bass and Maggie Thomas our sound engineer. Additional musicians on the album were  Brain Rath ,  Hamish Davidson and Ian Herman from Tananas.

click images to read text in a bigger window:

Bigger Than Jesus: The title was inspired by the John Lennon comment that saw the Beatles being banned by fundamentalist Christians across America. The comment that burst the Beatles’ bubble some say. Censorship had become an issue through out the 80’s for Shifty Records and particularly the silencing of peoples poet Mzwakhe Mbuli by internment. The Publications Control Board, set up in 1963 by Dr Verwoerd  to ban films and books and anything that threatened public morals or security. This was the most controversial of the Surfers albums : it was banned (deemed undesirable) by the South African publications control board. Court case documents and extensive lyrics and liner notes are part of album download. So too are the tracks which were taken off for the UK release. By purchasing the album you get these tracks as free inclusions.  It published lists every month of banned items. Bigger than Jesus was banned for distribution and immediately Shifty Records lodged an appeal which saw a  panel of experts from the board deeply studying the record to find proper reasons for their descision. (they hadn’t actually listened to the album it seemed) The track “Gutted With the Glory” was singled out as the offending piece. A William Burroughs inspired cut up between the raid on Lesotho ( by SADF forces in which a friend of ours was killed) and the Lords Prayer. The lawyers argued that this was not anti-Christian but anti -war. The case was resolved by us agreeing to putting a sticker over the title and changig the name of the album: hence “Beachbomb”.

An interesting aspect to the banning is that during this time nothing was deemed “Desireable” . The album was found to be “Undesireable” and was banned and then found “Not Undersireable”after the court case. The album download includes  the legal papers ,which are quite amusing and both covers and various scans from the inner sleeve lyrics record centre etc.

LIVING IN THE HEART OF THE BEAST

This is the second album done for Recommended Records by the Surfers. (Title taken from the a track on the album In Praise of Learning by Henry Cow song -composed by Tim Hodgkinson ) Long before sampling became mainstream the Surfers were using cut up bits of radio broadcasts, political speeches and making drums loops with 1/4 inch tape, scissors and sticky tape. Working on an Otari 8track tape machine  in a mobile studio it took hours to put these pieces together. Recorded at the Shifty mobile in 1985 it came to the attention of the British music press and received good critical response. Here is an exerpt from the New Statesman reveiw: ” …it works because it is a formal success: cut up Botha speeches and Afrikaans-speak are set against hi-life and reggae rhythms, while viciously critical (and historically intelligent) lyrics are sung over ..settings that often recall early Zappa….it’s possible to underestimate the powerful symbolism of a record that mixes the rhetoric of white supremacy with black rhythms and thereby undercuts it.” Jon Savage

Living In The Heart of The Beast

Living In The Heart Of The Beast – Kalahari Surfers (1985)

Own Affairs:  For the first time ev

er the early Recommended Records releases of the Kalahari Surfers’ vinyl albums have been mastered and packaged for download. These include all liner notes and added bonus songs etc in the album downloads .You can listen to complete songs in full quality  at this link:  Own Affairs It is the first of these releases. An historic album which captured the feeling of Apartheid Big Brother preoccupations and concerns of that time. It also began the  relationship between the Surfers and Chris Cutler of ReR.  Own Affairs was recorded in the  Shifty Mobile Studio  and was the first full length Kalahari Surfers album. Completed in summer of 1984 it was taken to EMI to press but rejected by the cutting engineer, Pietman Potgeiter, as being “political, pornographic and anti religious” . Chris took up the challenge and released the album through his label.

Below are some of the inserts and artwork that come with the  download. 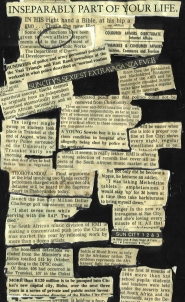 collage from the LP insert

about
Songs recorded in 2004 when the girls were around 12 years old. They wrote all the material themselves and were edited and nudged along by Warrick Sony who was very inspired by “the Shaggs”
see: en.wikipedia.org/wiki/The_Shaggs
credits
released 04 November 2004
photographs by Mark Baldwin
recorded at Milestones Studios Cape Town
http://www.milestones.co.za